It would be silly to presume that it was possible to measure the level of hurt or anger felt by people in a relationship. It is also silly to think it is possible to measure the level of responsibility in any specific disagreement. The aim of the 50:50 rule is not to insist on equal hurt or exact equality of responsibility. Rather it is to emphasise that in every issue that arises in a relationship both partners have responsibility for it and that the best strategy for addressing it is to presume that the division is 50:50. The point is that this encourages each partner to seek out their own contribution to the issue and to be willing to own it. This is the fastest way that Eva and I have found to resolve issues – we have never resolved anything by presuming that one person carries all, or nearly all, of the responsibility.

All couples develop what we call a dynamic between them. This is a pattern of behaviour and understanding that may not serve them in the long term. Because the two people enter into this dynamic voluntarily, and because they have the same power to end it, it is helpful for them to take equal responsibility for both creating it and continuing it. However seeing one’s contribution to an unhelpful dynamic is hard – and usually embarrassing, maybe even shameful. Here is a short version of a personal example (the longer version is here)

Last year (in 2013) a dynamic between Eva and I became so acute for me that I saw through it. What I saw shocked me to the core. I saw that Eva was not considering me. Eva was behaving in a self-centred way and in the habit of ignoring what was going on with me. Put like this, which is a true description, it sounds as if the fault is all Eva’s.

But what really shocked me was that also I saw how I set this up. I did so in several ways. First I loved serving her, so I was encouraging her to sit back and let me give to her all the time. The second thing I did was that I hid my vulnerability. I had learnt to do so as a child and continued all my adult life – so even had she been looking to see what was going on with me it would not have been easy. This was all compounded by the fact that I was not considered by my parents when I was a child – so I had become used to being ignored – indeed it was only in this crisis that I noticed it for the first time.

So I was contributing to the dynamic between us by
1. not noticing when I was not being considered – so of course I never gave Eva any feedback about it
2. not showing her my vulnerability, so even if she tried to see it would have been hard for her to consider me
3. smothering her with stuff from me to her, so much so that she didn’t have time to see me at all

Eva explored her part and recognised
(a) how self centred she had become (exaggerated by her being ill at the time)
(b) how lazy she had become (in part because I was doing everything)
(c) how she wanted me to be strong and invulnerable – to provide her with safety and reassurance. So she didn’t want to see my vulnerability.

That was her 50%. And of course these contributions dovetailed together perfectly. We had perfected that particular dance for 35 years and undoing it is still in progress (in 2014) – but we have made a lot of progress in just 18 months. The example illustrates that it requires both contributions to make the dynamic work, which emphasises that each person has the same power to end the dynamic.

In many relationships there is some version of the victim-tyrant game operating in which one person claims to be dominated by the other i.e. they are claiming much less than 50% responsibility for what is happening. But this is just a game, the victim can end it at any time by simply saying “I am not having this anymore”. It is also a very destructive game because both sides are building up resentments that cannot be resolved within the game – and at some point the resentment will reach the point where one person does choose to leave the relationship. My strong advice for people who are in such a dynamic is to end it as quickly as possible. 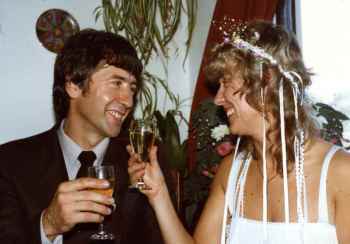